In the 2019 Annual General Meeting, Colin was honoured with Life membership of the Melbourne Marathon Spartans club. 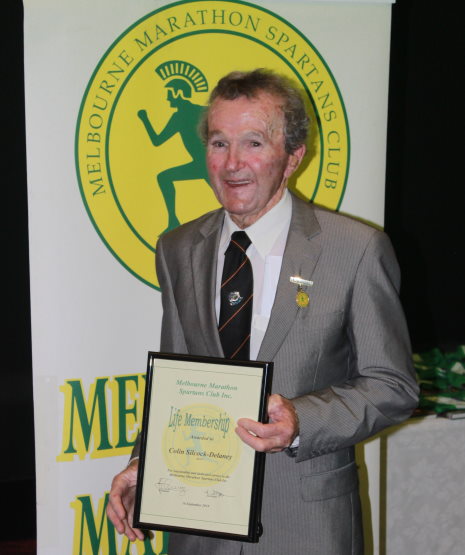 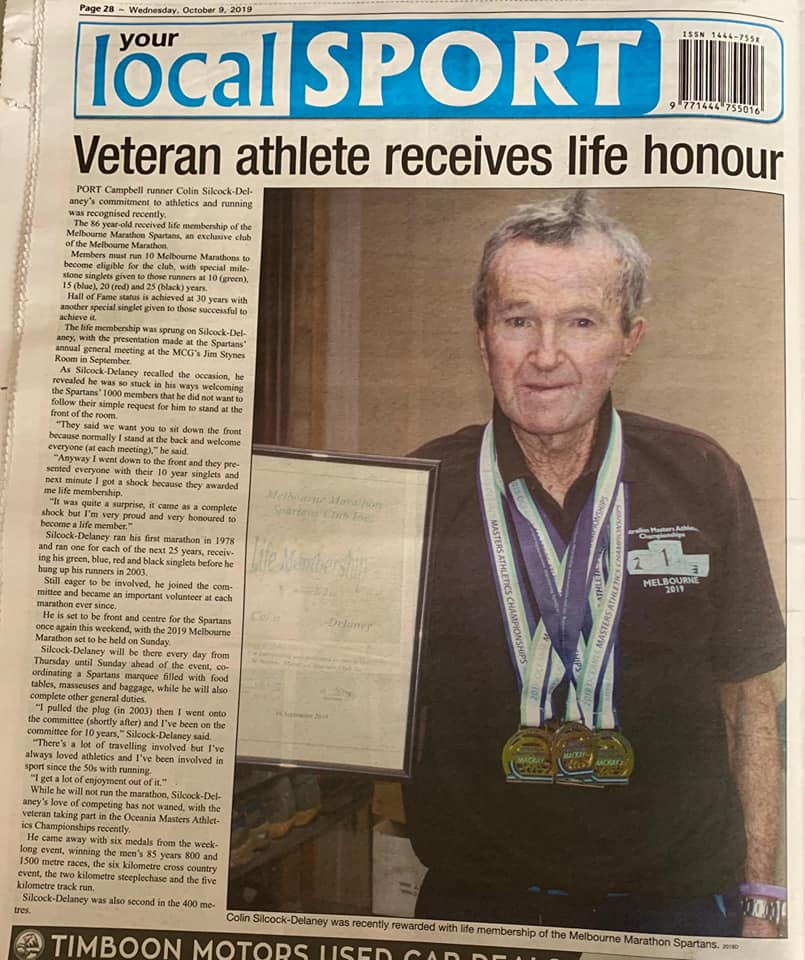 Click on this image to get a full screen view which will be easier to read. Most current runners will know Colin as the member who the greets AGM visitors, mans the Expo tent, and manages the Spartan tent on race-day. Many will know that he is a 25 run Spartan with a best Melbourne Marathon time of 2:51:30 in 1982. The fact that he last ran the Melbourne in 2004 doesn’t mean that he has retired to the couch. The picture at left shows him with one of the five gold medals he won at the Oceania Masters Games held in early 2018 at Dunedin, NZ. This was his 11th world masters athletics track and field championship, but his first as an 85 year old.

He has run a total of 100 marathons, in all kinds of places. Colin had been competing in the World Masters Track and Field in Finland and later while travelling in Norway heard about an inaugural marathon on a small island, and was encouraged to enter to add an international component to the event. He says he finished last, but I don’t believe that. Another time, after competing in a championship in Buffalo, he was travelling in Alaska when he saw an advertisement for an event in the capital, Juneau. He ran that marathon too. When he can’t sleep at night, he counts through the 100 marathons – see the image at the bottom of the page.

Colin has been on the Spartans committee for several years, and travels from Port Campbell to attend meetings. The work he does for the Spartans at marathon and AGM time is invaluable. We are not the only group to profit from Colin’s energy and civic spirit. Here is an extract from an application to be a baton bearer at the 2018 Commonwealth Games: Colin is an inspirational & extraordinary man with a lifetime commitment and focus in helping people. A lifelong volunteer in numerous local charities, sporting organisations and schools, Colin has given freely of his time, sharing his passion and love to inspire and promote all things sport and in particular, athletics, football and running. Colin is well known and respected with all those who know him and is a current CFA member, an active member of St Vincent De Paul, life-member of St Joseph’s Football Club, participates in Masters Athletic events locally and overseas and has run over 100 marathons since the age of 40.

The photo of the after marathon tent shows Colin Silcock-Delaney with daughter Colleen (Jack Fredrickson is in the background). 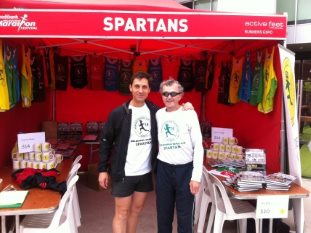 John Kaparelis and Colin after preparing the Spartan tent for the 2014 Expo. 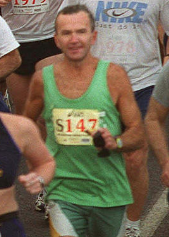 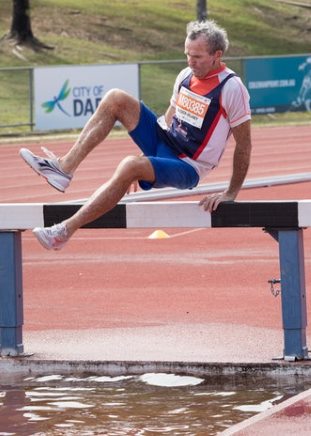 Colin winning gold in the 2000m steeplechase at the 2017 Australian Masters Athletics Championships in Darwin.
Here is a 2017 story on Colin from the Warrnambool Standard. 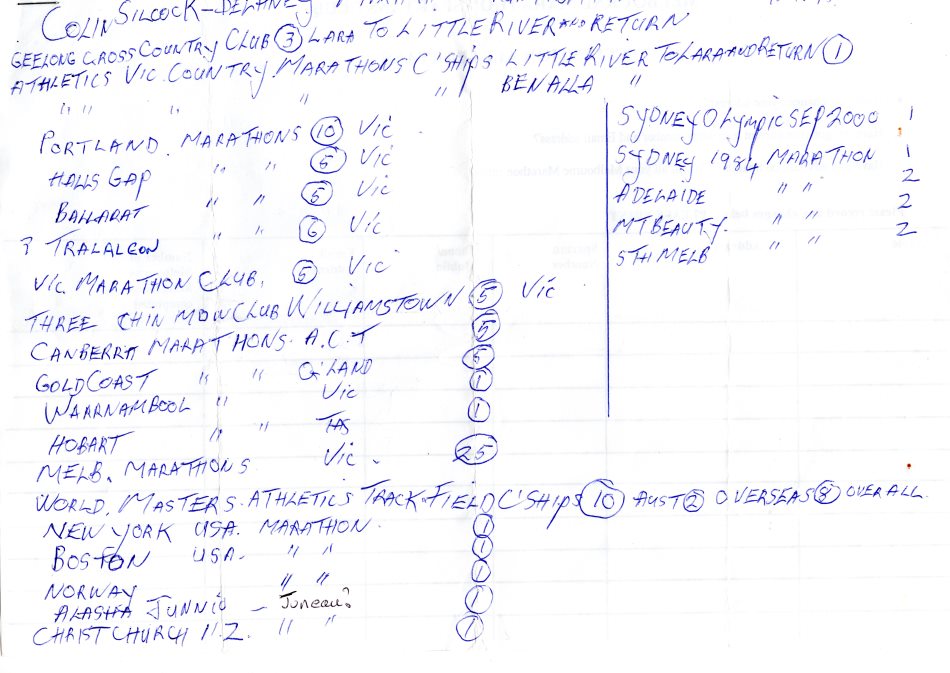 Colin wrote out this list while manning the Spartans tent at an Expo a couple of years ago. 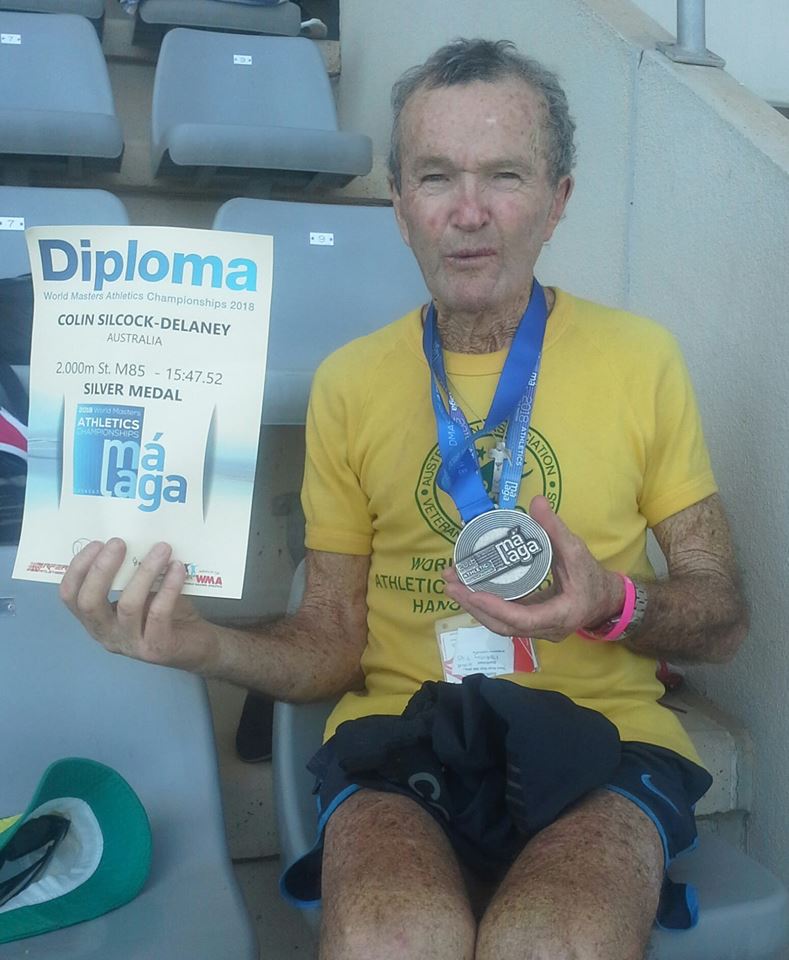 Colin with his Silver Medal in the 2000m steeple, M85+. He also competed in the 5000m and the 10km walk, gaining two silvers and a bronze overall.

This is an extract from the history of the Geelong Cross Country Club.

Colin Silcock later known as Colin Silcock-Delaney was the first member to clock up 200 runs. A taxi driver, Colin worked late Saturday nights, so was often late to races in the early days of the club. He won the club’s very first race, also the first club marathon when his crew fed him honey. Colin lived in an orphanage as a child and was in his sixties when he discovered his family roots. His dad had been an accomplished athlete and cyclist. In 1973, Colin arranged the prizes for a charity club race which donated the race proceeds to the St Augustine’s Orphanage, where Colin was raised. Colin has competed at numerous World Masters Athletics Championships over the past forty years. At Colin’s 80th birthday celebration at the Batesford Hotel, true to form, Colin arrived nearly two hours late.

Colin turned 90 in October 2022, and his daughter Colleen organised a celebration of his life. More than 90 family and guests were present to hear from the man himself, as well as tributes from friends and workmates. Spartan President Jay Fleming (pictured bottom left with Colin) was among those who spoke. 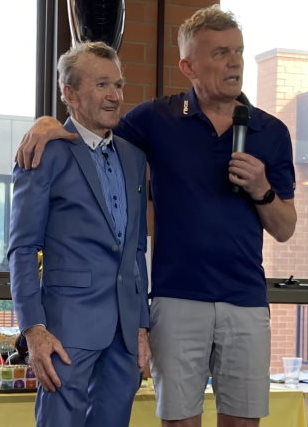 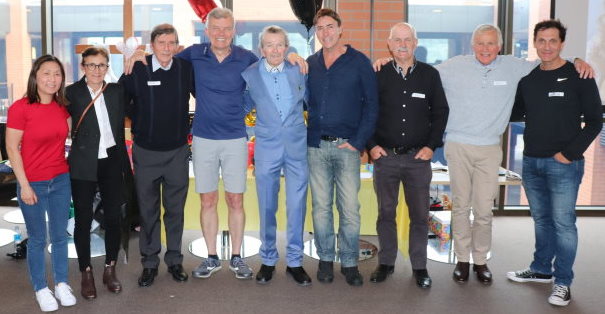