Photos have now been posted here and there are more here.

Thanks to ex-President John Dean we have a large collection of race photographs. They are organised by years and for some years we have a lot (1978 – 400+), others very few (2004 – four). They were taken on behalf of the organisers of the early Melbourne Marathons.

The photographs have no descriptions, the quality varies, and there are some duplicates. If you can identify Spartans before they achieved their numbers, please let us know.

If you have some Melbourne Marathon photographs that we could use, we would be delighted to upload them. 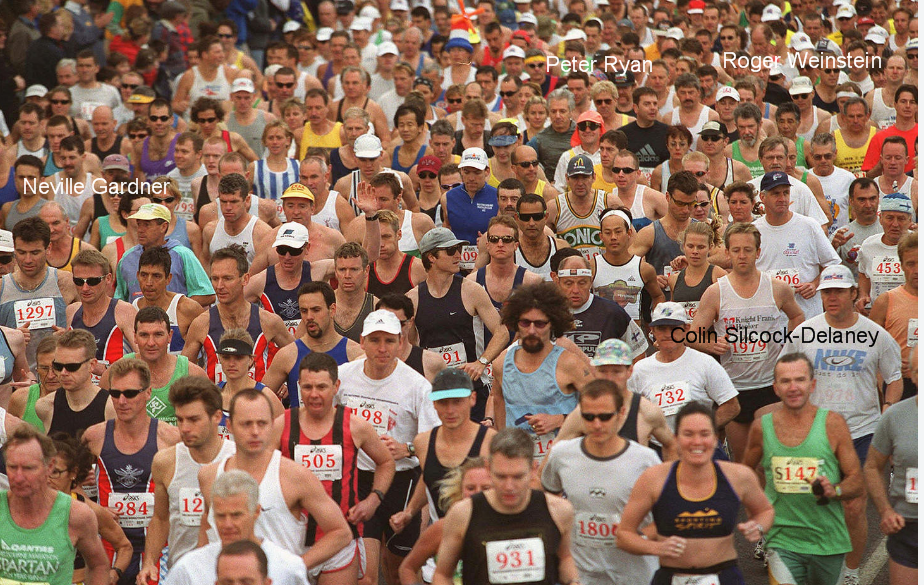 John Dean has identified four runners in this photo. Anyone else with some more names?

Mark Foley (S0979) has identified himself in the photo above: “I’m in there at about the mid-point between Neville Gardner and Colin Silcock-Delaney. I’m hatless, wearing a dark singlet and right in front of the left arm raised in the air.”

Clarke Whitehand (S0160) has identified Kevin Chandley (S0311) in the bottom left hand corner. Peter Smith (S0717) has identified himself as being diagonally behind Kevin, in the third row. He has confirmed that this was the 2001 event.