President John Dean made the following speech at the 2006 Annual General Meeting.
At last year’s AGM a motion was moved and carried that the Constitution of the Melbourne Marathon Spartans Club be amended to allow for a Spartan or Spartans to become Life Members of the Club.

I’m pleased to announce that the club is now in a position to acknowledge those Spartans who have not only run many marathons since the formation of the club in 1987, but have given their time over the past 20 years to be involved in all aspects of the Club thus ensuring the Club gets bigger and stronger as time goes on.

Prior to announcing the inaugural Life Members of our Club I’d like to reflect a little on how this all came about. If my memory serves me right it was in 1987 and prior to the 10th Melbourne Marathon that the 88 runners who had completed the first 9 marathons received a letter from the then Melbourne Marathon Director Ted Paulin and Brian Dixon, Chairman of the Melbourne Marathon Board, inviting them to a meeting which was to discuss the Spartan concept.

It’s pleasing to see that a number of those that were first to put their hands up for a Committee position back then are here tonight and still actively involved.

I’m honoured to now present Life Membership to seven Spartans (Ken Matchett, Peter Ryan, John Raskas, Peter Feldman, John Dobson, Conor McNeice, John Dean) here tonight in appreciation for their commitment to the Club over many years. Unfortunately, due to family commitments interstate two recipients could not be with us tonight. (Ron and Shirley Young received their awards at the 2007 AGM.)

Later Life Memberships have been presented when deemed appropriate by the committee at the time. 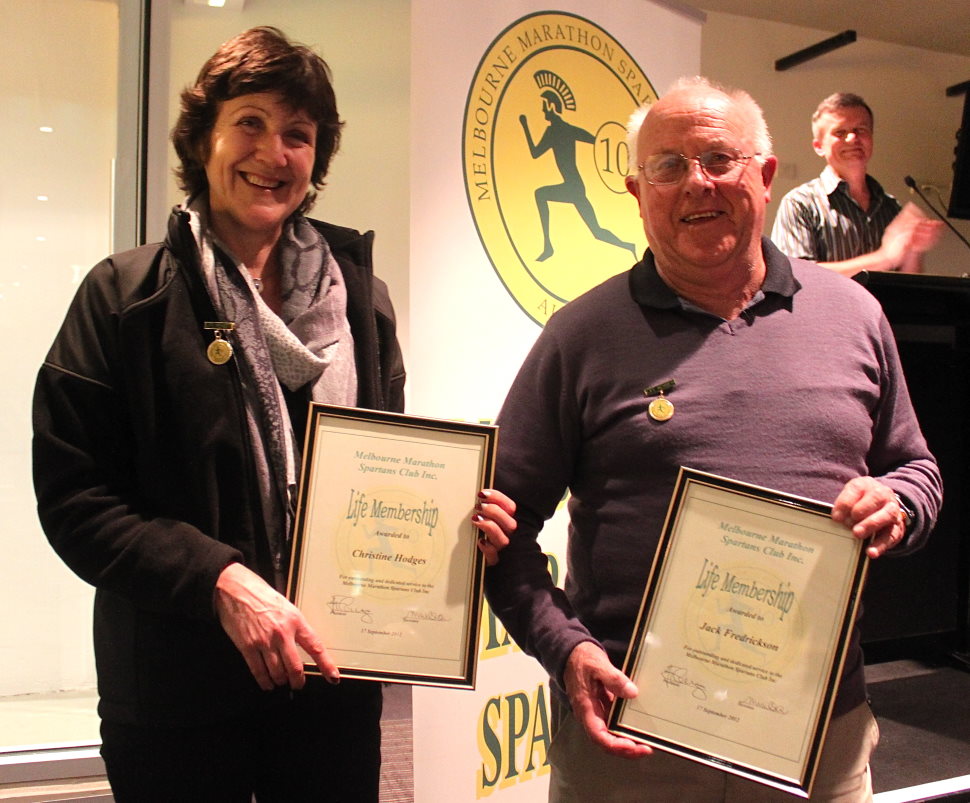 Christine Hodges and Jack Fredrickson displaying their certificates and medallions presented at the 2012 Annual General Meeeting.
The list below shows all Life Members in chronological order of the presentation. It is planned that eventually there will be an individual page for each life member.