“Daddy, what does Hapalua mean?”

It is March 2017, and my 10 year old daughter is asking me about our family’s upcoming trip to Hawaii, in the first 2 weeks of April – school holiday time in Victoria. While there, I will run the Hapalua half marathon in Honolulu on Sunday 9 April. In these days of race carnivals, it is common to have several races over different distances on race day. Not so the Hapalua – it is a half marathon and nothing else. There are some 9000 entrants, of which 2000 are from Japan, and at least 66 Australians. I have trained well for this race, and I look forward to a good run.

Our accommodation in Honolulu is an apartment in Waikiki, conveniently close to the half marathon start and finish lines. The race starts at 6am Sunday morning. The previous night, besides getting my running gear ready for the morning, I also pack my bags, because our plan is to fly from Honolulu to the Big Island late on Sunday morning. There is just enough time after the race for us to get to the airport. Race day, Sunday morning, and at 5:20am I leave the apartment and walk through the streets under a completely dark sky towards the race start. It feels pleasantly warm, which means that it is too warm for distance running – but this is to be expected in the tropics. At 6am it is 21°C, the overnight minimum, and by 9am it will be around 27° with a clear sunny sky. Humidity at 69% is tolerable. As I walk, I can hear the race announcer talking, but initially all I can make out is “Bromphruss gontchrab sumbramps”. As I get closer, I hear him calling out the names of the top international and local runners who are starting in handicap order before the main field starts. “The Chase” is a unique feature of the Hapalua half marathon: the best local runners from Hawaii get a head start on some of the best professional runners in the world, competing against each other on a handicap basis for prizemoney.

The race start is next to the beach at the statue of Duke Kahanamoku, a revered Hawaiian, a 5 time medallist in swimming at 3 Olympics, who is most remembered for popularising surfing worldwide. I find a place in the crowd of runners not too far from the start line, hoping for an easy start. The sky quickly changes to light grey, and by the time of the race start it is changing again to pale blue. The sky is hazy, though, and we are cautioned about ‘VOG’: volcanic origin gases; the Kilauea volcano on the Big Island is continuously erupting, spewing sulphur dioxide and other nasty gases into the atmosphere, and forming that haze we can see overhead. Before the start there is a spirited rendition of the Star Spangled Banner, and at 6am the gun is fired to cheers from the crowd.

I had hoped for an easy start; I was disappointed. As we make our way through the start barrier, it is immediately obvious that there is no start line protocol for slower runners to be further back. I am forced to weave past slow joggers and even walkers who clog up the road from side to side. I run on the sidewalk, and at times on the grass nature strip, just to get around them. It is more than a kilometre before I can settle down to running, and 3 km before I can run steadily at my preferred pace. Later, though, when I check my times, I find that I lost less that a minute in the confusion. By 15 minutes after the race start, the day is already sunny and bright; it is the tropics and daylight comes quickly. I am running steadily now, at a conservative pace, knowing that the day is warm and the hardest part of the Hapalua comes late in the race. The course here is dead flat, running parallel to the beach, never far from the water, the greatest change in slope being a small humpback bridge. During this easy stage, around 4 to 6 kilometres from the start, we see the top runners in the Chase, already returning towards the Duke’s statue, the two Kenyan men running together, going so fast – one of these athletes has a 60 minute half marathon time.

At 6km the course turns away from the water and follows a 2km loop through downtown before heading back the way we have come. In the full sun it is starting to feel warm. I am glad that I have been running easily; this is clearly not a course for fast times. Drink stations are frequent and well placed; I pause at each one to make sure of getting water. An interesting feature of this race is that there is no time limit. At about 10km I see the tail enders who are at their 3km mark, still heading towards downtown while I have left downtown far behind. At that rate, they would finish with a time more than 3 times greater than mine, and later I learn that the last person finished in 6 hours 33 minutes.

Sadly, there are almost no spectators; I suppose that the early hour is not attractive for anyone except a scattering of supporters. Even when we return to the touristy part of Waikiki, the few people around at this hour seem more surprised than supportive, and concerned mostly about crossing the road with so many sweaty bodies in their way.We wend our way back to the Duke’s statue at 13½ km. Soon after, we pass the Honolulu zoo and its iconic banyan trees at 14km, and curve left away from the beach. I am pleasantly surprised to find that my time here is 70½ minutes, notionally on target for a finish in 1 hour 46½ minutes. However the hard part of the course is still to come. 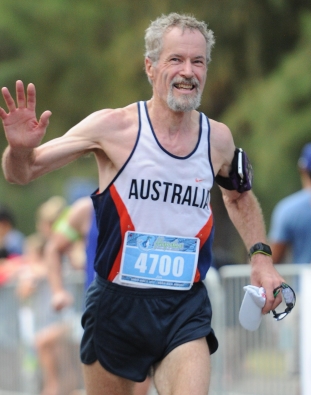 The Hapalua now follows the road looping around Diamond Head, an extinct volcanic crater rising almost directly out of the ocean which looms over the southeastern corner of Waikiki. As we head away from the beach, the road begins climbing, gently at first, then steadily, rising to 59 metres above sea level, with 46 metres of climb in just 1km. It is not difficult, but coming towards the end of the race means that this is a challenge. Then steadily downhill to 23 metres above sea level, and a second climb back up to 43 metres. Then downhill again, this time right back to beach level. As I am heading downhill that second time, another runner with a gopro camera on a handle interviews me as we are running. I tell him that I will be pleased to finish in under 2 hours, and we both agree that I will smash that time. There’s a final kilometre of flat running to the finish line. I am happy to finish, although I am soaked with sweat and my legs are tired. Officially I completed the Hapalua in 1 hour 50:33, one of my slowest ever half marathons, but I don’t care about that. The finishers medal in glittery gold is delightful, a rotating disk inside an outer ring.

I grab some fluid and a bite to eat, then I walk back to our apartment – after all, we have a plane to catch. There, I log on to check my finish time on the live results, and in mock shock I call out “Oh no!”. “What’s wrong?” my family ask in unison. I tell them that I have won third place in my age group, so I have to return to the presentations at the finish line to collect my trophy – I know already that trophies will not be posted out. The awards ceremony takes an eternity. First there are prizes for the “Chase” leaders, then for outright times, then for every 5 year age group from under 14. My 65 to 69 age group comes up at last, and I get my 15 seconds of standing on the stage being congratulated. The trophy is a wooden plaque about 20cm square, shaped like a fruit platter.

I return quickly to our apartment, half jogging because it is now late for getting to the airport. When I get there my family is already heading downstairs to meet the booked taxi; I am just in time. The Hapalua is a great half marathon, worth considering if you are in Hawaii in April.

And what does Hapalua mean? Could it be the name of another famous person from Hawaii, or a location on Hawaii, or one of the Hawaiian gods? None of those: in the local language it means ‘half’. Hapalua half marathon – of course. 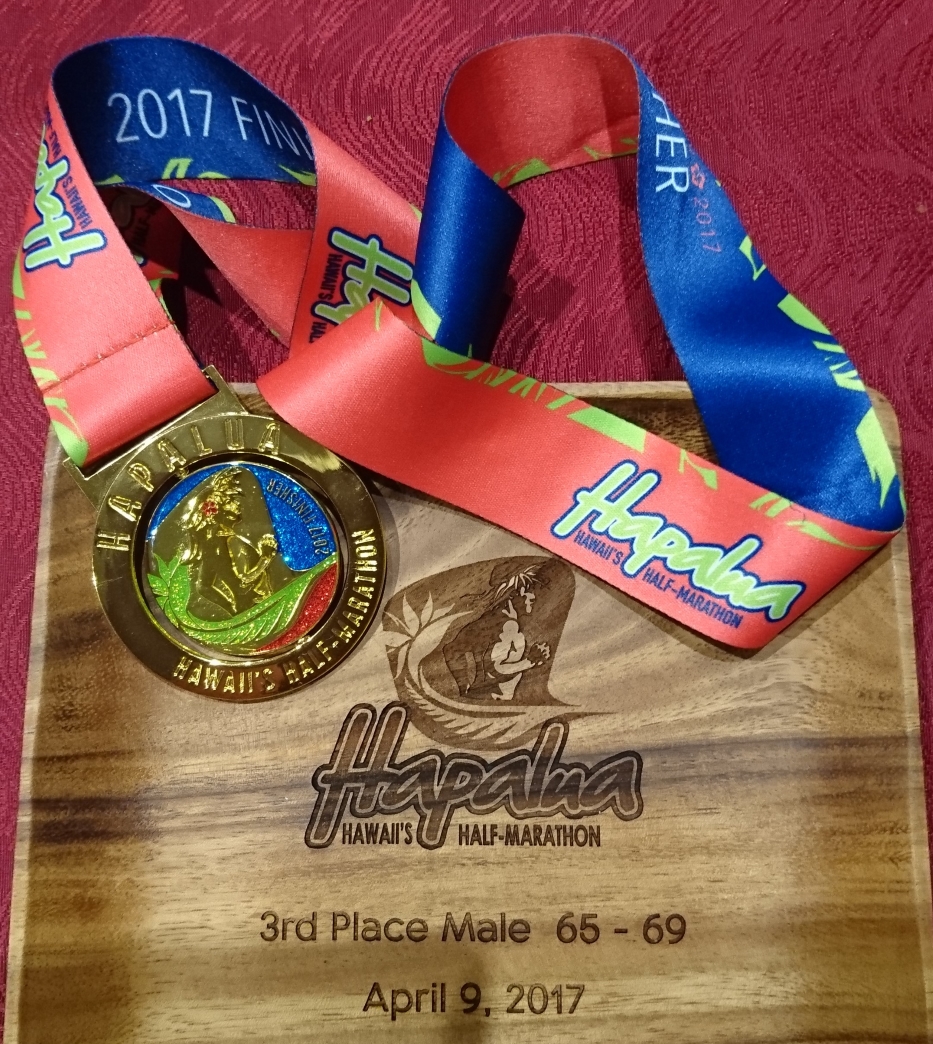