Ian finished 39 consecutive marathons between 1979 and 2017 and brought up his 40th in 2019. The photo below shows him receiving his 40th singlet from Sonia O’Sullivan at the 2018 Annual General Meeting. 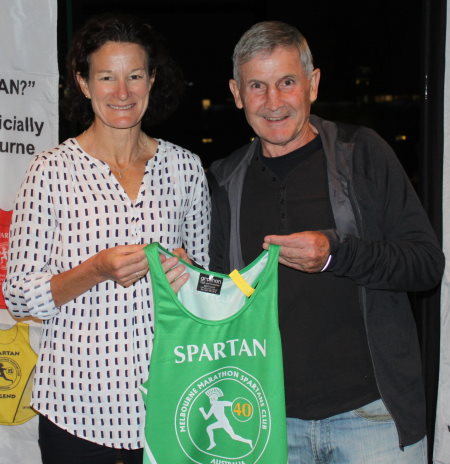 My Virtual Marathon experience was something completely different to anything I have ever done. I decided to enter the Melbourne Virtual Marathon to add to the other 40 that I have accumulated over the years. So with little more than a number of 5k walks during the year and a couple of 10’s around Bright when we were released to the greater Vic. I entered with the aim of completing the 42k by WALKING only.

I selected the Main Yarra Trail parking at the end of Bonds Road, Lower Plenty. At 7am (Thursday 10th Dec , picked a cool day) I set my watch, pressed START on the phone APP and set off at a 8min/k pace in the direction of Fairfield via Warringal Park, turning at the corner of Heidelberg and Chandler Highway, retracing my route back to Bonds Road (slight diversion at the Burke Road river crossing up to Bulleen Road to make up some Kms). My watch said I was then at 33k so I needed the round trip back to Warringal Park (10k).

After about 200m my Fitbit decided to run out of battery 5.5hrs not sure why as it normally runs for days between charges could have been the pulse monitor. At this stage my legs were telling me that there was a wall to get over with both calves cramping at the same time, I was very close to and nearly chucked it in, but with a bit of a rest, stretching the legs against a log, water and a hand full of snakes I set off at a significantly reduced pace.

I finally arrived back at my car after 7.25hrs and tried to press SUBMIT completion on the APP but it was telling me to press START. At this stage I was not very happy. 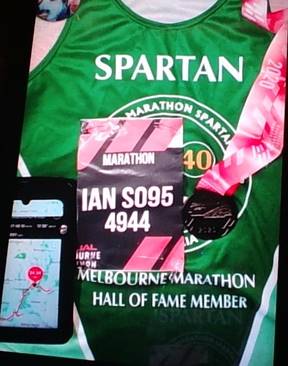 On arriving home a quick email to Active.com to explain what had happened resulted in Ebony Jenkins of MMF Customer Service advising that I had not redeemed my entry (even though I had tried and had been able to print a bib) and I had not been in race mode. On redeeming she was able to add me to the official APP leader board and I have since received the MM 2020 medal.

Thank you Ebony for the excellent service and your comment that some of the younger generation had also had problems with the APP, which made me feel a bit better. If there is a next time I will definitely do a trial APP run/walk to ensure it is operational.

PS. Surprisingly on the Friday the legs did not seem to realise that they had just walked over 43k the day before.