Adapted from the Tribute presented by David Foskey, 2020 Virtual AGM

John Dean, Spartan S20, will not be on the committee of the Melbourne Marathon Spartans after this meeting. This is remarkable because it is the first time in the Club’s 32 year history that John has not been an officer. He was on the first committee in 1988 and became the club’s third President in 2004 for the first of his seven terms after Peter Ryan stepped down. When Jay Fleming took over in 2011, John stayed on the committee as Immediate Past President. 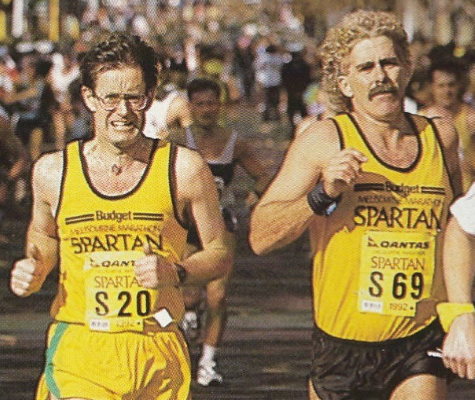 John was one of the Legends who have run all Melbourne Marathons. He broke a bone in his leg before the 2010 marathon, which would have been his 33rd consecutive Melbourne. He didn’t give up easily, having previously overcome serious injuries. Bruce Reid, the Essendon Football Club Doctor, passed on the news that a young VFL footballer wouldn’t recover in time for the 2010 marathon and informed John that he was no longer young. Ian Gainey was consulted to see if becoming a wheelchair participant would solve the problem but Ian soon set him straight. John is sure, and I agree, that he would have completed 42 Melbournes had his accident not occurred. His best Melbourne marathon time is 2:58:22. He has completed the famous Comrades ultra-marathon three times.

I first met him years ago when he was involved in the organisation of Spartan charity runs. I recollect us on a long run that ended at VFL Park Waverley in the St Kilda dressing rooms before a game. Some of the players were less than impressed that Shirley Young was present.

I have been on the committee for nine years which has given me ample opportunity to observe John at work. As a committee member, his attributes include patience, diligence and thoroughness with a strong moral sense. He responds thoughtfully when issues are raised after coming to a full understanding. A typical meeting sees John consult a pile of notes and deliver the outcome of his work on whatever project he has been covering. For instance, the organisation of the Annual General Meeting results in detailed agendas and task lists. Unfortunately, even John couldn’t deliver the MCG this year but he has ensured that our deposit will be carried forward to 2021. He has also passed on as much of his knowledge as possible to other members. It was typical of John to give the committee ample notice to enable a smooth transition.

At one stage his garage was full of Melbourne Marathon and Spartans paraphernalia. He saved hundreds of photographs which would otherwise have been thrown out when management of the event changed many years ago. His collection of Melbourne Marathon result books has been very handy at times.

John will be lost to us in a formal sense but I’m sure will respond to emails and phone calls. He intends to continue serving the community as a member of the Rotary Club of Keilor. He and Karen might even be able to enjoy the cruise they have had to cancel.

John, we wish you happiness in this next phase of your life.

John is a very strong family man, they always come first no matter what. He is very particular in all things he does, I think it is from having been a Bank manager for so long. He is a very positive person. Do not go to buy shoes with him unless you have plenty of time, and then he may not buy any.

I first met John and Karen at the World Vets Games in Eugene USA. On return I joined Aberfeldie Vets where we both run.

John suffered badly when he broke his ankle shortly before a Melbourne Marathon and he could not run, as this meant his Legend status had ended. It has taken a long time to get him back to the marathon (he completed the 2019 Melbourne). He now runs a lot of Park Runs and is slowly running longer. 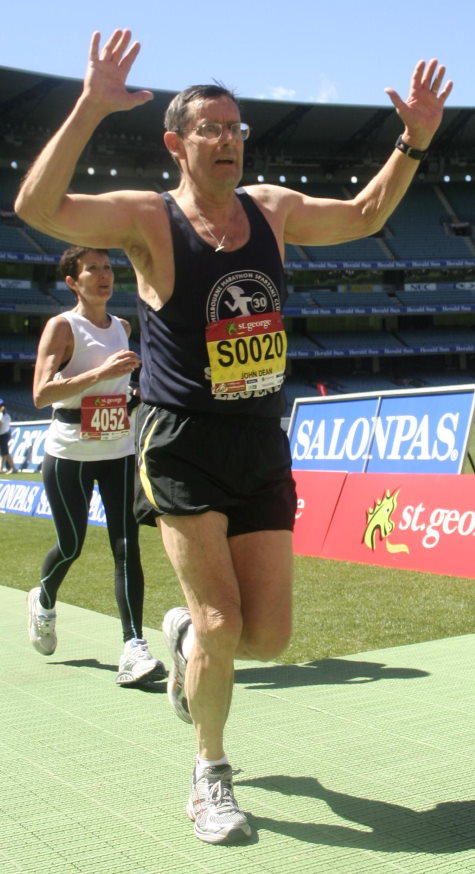