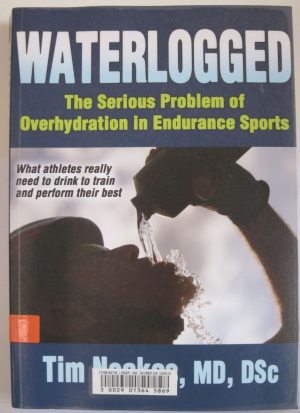 “Waterlogged: The Serious Problem of Overhydration in Endurance Sports” is the latest book from Tim Noakes, author of “The Lore of Running”. In “Waterlogged” he examines the “drink early, drink often” recommendations to distance runners. He describes the history and science and why these suggested rates are both incorrect and dangerous. He is a medical doctor, a widely published scientist and a foundation member of the International Olympic Committee’s Olympic Science Academy.

Until the 1970s, marathon runners drank very little. Anyone who heard Derek Clayton describe, at a recent AGM, his 1967 world record will recall how little he and the other leading runner drank during the race.

The studies that lead to the development of Gatorade changed the attitude to the need for drinking before, during, and after exercise such as the marathon. The suggestions were to drink substantial amounts before a race (250 to 500 ml every 10 minutes),  during the race (250 to 350 ml every 15 minutes) and then rehydrate after the race. Noakes shows that adherence to this regime can lead to dangerous lowering of blood sodium levels (hyponatremia) which if incorrectly treated can result in fatalities.  The death of Cynthia Lucero after the 2002 Boston Marathon is described in some detail.

The book  presents much data and references many academic papers. The results of experiments and records of treatment of athletes after events are discussed in detail.  It isn’t an easy read, but is presented in such a way the the diligent lay person can follow the arguments.

A supermarket label check revealed most sports drinks still recommend up to 1 litre per hour be consumed, with one powder suggesting up to 1.4 litres of solution per hour during an event.

December 23 Edit: The current issue of Run For Your Life magazine has an article entitled “Hyponatremia –Too Much Of A Good Thing?” which includes “Waterlogged” as one of its references.

April 2014 edit: I’ve just learned that ecstasy users who drink water to cool down and combat dehydration are also at risk of hyponatremia. Although rare among users, this is one of the major causes of ecstasy related deaths.