The Complete Book of Running 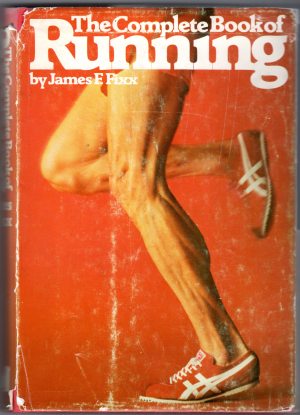 Everyone knows two things about this book:
– it was a large part of the running boom in the late 1970s and among other benefits of running, made the claim that anyone who trained properly for a marathon was protected from heart disease;
– James Fixx died of a heart attack at a comparatively young age.

It was published in 1977 in the United States, and my copy was printed (in Fitzroy) September 1978, the fourth reprint in 2 months. It is doubtful that I bought it before the first Melbourne Marathon in November 1978, but I read it with great interest. Bill Rodgers was an early hero of mine and the Boston was the only overseas marathon I ever seriously thought of entering. Trivia question: what do Bill Rodgers, Frank Shorter, Sebastian Coe, Robert de Castella, and Steve Moneghetti have in common? (Answer below.)

On re-reading, most of it stands up very well. Certainly, a beginner who read this book from cover to cover would have sufficient information to train for and complete a marathon based on the principles of training which are explained clearly. A little Googling for itemised plans would help with constructing a specific training schedule.

Most of the current major shoe manufacturers were active in 1977, but I don’t recollect shops dedicated to running equipment. The shoes he is wearing on the cover are, I suspect, Tiger racing shoes. They don’t look to have much in the way of cushioning. Probably the area that would shock Fixx most is that we can now have a heart rate monitor and GPS on our wrist: he wouldn’t need to take his measuring wheel and paint brush out to mark distances for his training routes!

Even Fixx’s claims for the health benefits of running and regular exercise are now part of standard recommendations for a healthy life. His own life doesn’t necessarily contradict this: he had been overweight and a heavy smoker before becoming a runner, plus there was a considerable history of heart disease in his family.

Answer to Trivia question: All five have run against me, and beaten me. There is no prize for the correct answer.