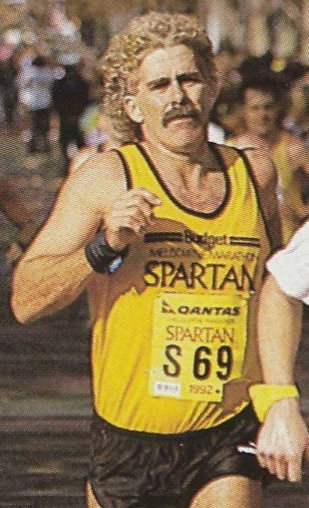 He ran the first 37 Melbourne marathons and thus was one of the Legends group. In 1983 he ran 2:54:20, one of his three sub 3 hour Melbournes. He overcame knee injuries, a mystery illness that required three weeks in hospital as well as open heart surgery five months before the marathon. His ambition was to reach 40 Melbournes, but his knee had other ideas.

Peter played one VFL game for Hawthorn and is listed in “The Wall” as the second fastest VFL/AFL player in the event. He continued his association with Hawthorn as a recruiter and has been awarded life membership of the club. 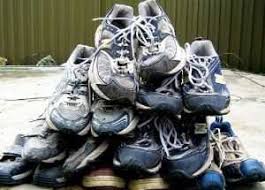 Peter was awarded an Order of Australia medal for organising football for people with intellectual disabilities. Members who have attended AGMs will be familiar with the collection of used runners that Peter collects for distribution to those less fortunate.

Here is a document from 2002 that the Spartans prepared for the Melbourne Marathon website which gives more detail on Peter’s non-Spartan activities.

As President of the Spartans, Peter was a member of the Melbourne Marathon Organising Committee in 1992, as Ken Matchett had been before him.

Induction as a Life Member

Peter was inducted as a life member of the club at the 2006 Annual General Meeting. Then Club President John Dean said: “Of the seven Spartans to receive Life Membership tonight, the Spartan that I now have pleasure in proposing for Life Membership is Peter Ryan, who, over many years has been an excellent contributor and I have no doubt is a most worthy recipient of our Club’s highest award. Peter was an inaugural committee member and elected to the committee position of Vice President which he held for four years. In 1992 Peter was elected President, a position he held for a further twelve years. During a further three years on Committee Peter’s contribution continued to be invaluable. For many years Peter represented the Spartans Club on the Melbourne Marathon Board and was instrumental in the ‘drawing up’ of the Club’s initial constitution.”

Note to running friends in October 2015

“Now that the dust has settled I feel a note is necessary.

“I was going OK in May, in the warmth of Thailand, but on return to Melbourne’s lousy winter I had problems each time I started any reasonable training. The last of which was in August, which is obviously “panic time” when my right knee that I had “scoped” in 2000 blew up. My physio helped greatly but I had trouble getting the last of the swelling down even though I tried all remedies including washing soda, cabbage leaves, standing in the cold water of the Bay and one or two methods that my father used on the horses that he trained. Hence I faced the question of not starting or starting and not making it in time. I’m glad I tried as I now know I just couldn’t do it. I used up my miracle be completing 2013 less than 5 months after my open-heart surgery.

“I’m obviously disappointed but the sun still rose on Monday and I consider myself extremely lucky. After 17 years of footy (I played my first senior game at 14) and cricket (many years as a wicketkeeper after starting in the seniors at 11) I started running marathons at 30. After 54 marathons and several ultras my knees have finally decided to complain more loudly. Hopefully it’s not the end of my running but I’ve just got to be smarter.

“To be a member of the Legends has been absolutely fantastic. Obviously there are runners who have run over 30 “Melbournes” but to be ready to run on the day for all 38 years is amazing. The feeling and respect among the group is simply sensational and I wish them all good fortune. The “Last Man Standing” will indeed be Superman. As it may be many years down the track I hope I’m around to see it.

“Former Legend or is it Original Legend
“Peter Ryan S69”

Legends at the start of the 2014 marathon. Peter is fourth from the right. 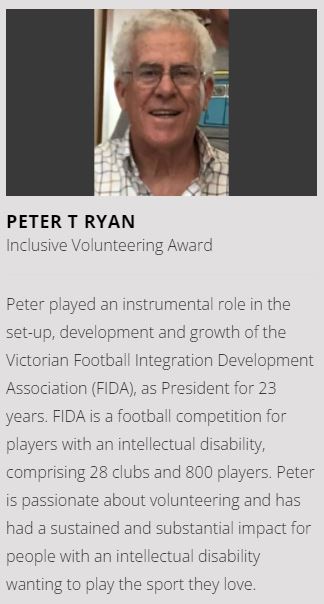 The screenshot at right provides a summary of the reasons for Peter’s recognition for this prestigious award.